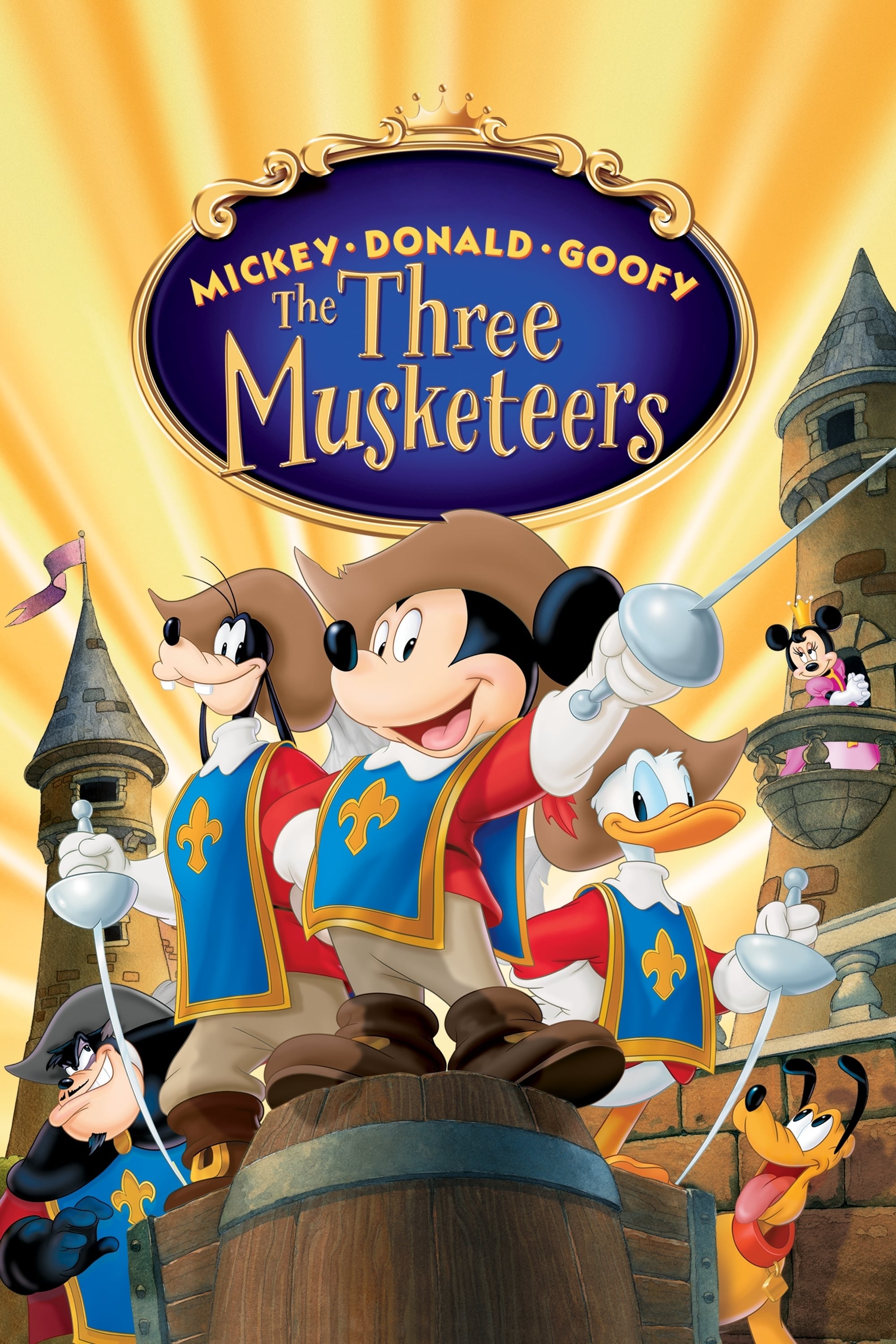 In Disney's take on the Alexander Dumas tale, Mickey Mouse, Donald Duck and Goofy want nothing more than to perform brave deeds on behalf of their queen (Minnie Mouse), but they're stymied by the head Musketeer, Pete. Pete secretly wants to get rid of the queen, so he appoints Mickey and his bumbling friends as guardians to Minnie, thinking such a maneuver will ensure his scheme's success. The score features songs based on familiar classical melodies.

Mickey and the Beanstalk

Based on the timeless adventures of "Jack and the Beanstalk," Mickey, Donald and Goofy climb a fantastic beanstalk up into the sky to a place where everything is huge -- the food, the castle and the fearsome giant named Willy who guards a beautiful golden harp! Will Mickey and his friends outwit the giant and make it safely back home?

Mickey guest-directs a radio orchestra. The sponsor loves the rehearsal, but come the actual performance, Goofy drops all the instruments under an elevator, so they sound like toys. The sponsor hates it, but the audience loves it anyway.

Goofy's in the driver's seat, Mickey's in the kitchen, and Donald's in bed in Mickey's high-tech house trailer. When Goofy comes back to eat breakfast, leaving the car on autopilot, it takes them onto a dangerous closed mountain road. When Goofy realizes this, he accidentally unhooks the trailer, sending it on a perilous route. They come very close to disaster several times, while the oblivious Goofy drives on and hooks back up to them.

Mickey, Minnie, Horace Horsecollar, and Clarabelle Cow go on a musical wagon ride until Peg-Leg Pete tries to run them off the road.

It's the 1890's, and Donald is riding his penny-farthing bicycle to see Daisy when Chip 'n Dale make fun of him. It quickly escalates into a full-fledged war between Donald and the chipmunks.

Mickey is trying to lead a concert of The William Tell Overture, but he's continually disrupted by ice cream vendor Donald, who uses a seemingly endless supply of flutes to play Turkey in the Straw instead. After Donald gives up, a bee comes along and causes his own havoc. The band then reaches the Storm sequence, and the weather also starts to pick up; a tornado comes along, but they keep playing.

Mickey courts Minnie in the Gay Nineties: they take in a vaudeville show and go for a drive in his horseless carriage, to the strains of "While Strolling Through the Park" and "In the Good Old Summertime". Goofy rides by on a penny-farthing bicycle, and the whole Duck family rides by on a bicycle built for five.

Pluto comes bounding outside to help Mickey get a Christmas tree. Chip 'n Dale see him and make fun of him, but the tree they take refuge in is the one Mickey chops down. They like the decorations, especially the candy canes and Mickey's bowl of mixed nuts. But Pluto spots them and goes after them long before Mickey spots them. Minnie, Donald, and Goofy drop by to sing carols.

Mickey shows off his ice-skating skills to Minnie; Goofy does some unconventional ice fishing; Donald straps skates to Pluto and laughs at his attempts to skate. Donald gets strapped to a kite and is about to be swept over a waterfall when Mickey pulls off an heroic rescue.

Mickey leads his polo team Donald (on a mule), Goofy, The Big Bad Wolf against an all-star team: Stan Laurel, Oliver Hardy, Harpo Marx (on an ostrich), Charles Chaplin, in a game refereed by Jack Holt. Featured spectators include the Three Little Pigs with Shirley Temple, W.C. Fields, and Clarabelle Cow with Clark Gable. Game action proceeds pretty much as you might expect from this bunch of comedians.

Pluto's in a dog show against lots of snooty, high society dogs. While Mickey's chasing after a dropped can, Pluto is making eyes at the dog next door. Pluto's turn for judging comes, and when the judge makes fun of him, Pluto gets mad and goes after the judge, which gets them thrown out. A fire breaks out, and the dog Pluto was romancing is trapped inside; it's up to Pluto to rescue her.

The gang throws Mickey a surprise birthday party; his present is an electric organ, which Minnie plays while Mickey does a jazzy dance. Goofy bakes the cake, but keeps having trouble with it falling. The gang does a conga line to a Latin tune.

The gang is on vacation. Goofy has some surfing problems, Donald learns why you don't wear a grass skirt near a fire, Pluto and a starfish have a tiff, followed by an encounter with a hermit crab.

Mickey oversleeps; Minnie calls from the dance he should be at. He dresses quickly and makes a mad dash for the dance hall, but what he doesn't realize is that the tickets have dropped out of the envelope Pluto brought to him. Pluto sees the tickets and races to meet Mickey, but he ends up rolling Mickey in a trash can. This trashes his suit, but it works out, because the dance is a "hard times" costume party. And Pluto shows up in the nick of time with the tickets, saving the day.

Mickey is performing routine maintenance on his tugboat (with interference from a pelican) when a call comes on the radio that there's a sinking ship needing assistance. Sadly, Mickey's crew consists of Donald and Goofy, so getting underway to help is not easy. Goofy has to fight a boiler's door to get it stoked with coal (and when he succeeds, he overfills it) and Donald gets tangled up in the machinery. Not to mention that nobody casts off, so they drag half the dock along with them. The overworked boiler soon explodes.

Pluto's conscience becomes the battleground when he saves a small kitten from drowning and then has second thoughts when Mickey welcomes it into his home.

When a giant threatens the land, the cityfolk mistake Mickey's boast of killing seven flies with one blow to be giants. He is then forced to fight the giant for real.

Mickey and friends put on a revue for the orphans. Donald recites nursery rhymes, but the orphans torment him. Horace, Goofy, and Clarabelle do a dance number. Donald tries again. Clara clucks a song while Mickey plays piano (with support from an unseen orchestra). Donald returns, and the orphans finally send a parade of bricks and eggs on balloons over him and use slingshots to drop them on his head.

Donald needs a log for his fire. Unfortunately, the one he picks is occupied by a couple of chipmunks and their stash of acorns. When he cuts it down, Chip and Dale fall out, but their acorns stay behind, so they work at putting out Donald's fire and retrieving their stash. Donald, of course, takes this as calmly and cheerfully as you would expect.

Mickey is heading out on vacation from Burbank to Pomona, taking the train. The conductor, Pete, won't let him on with Pluto, so he hides Pluto in his suitcase, and tries to hide him all throughout the trip without much luck. But Pete wins when Pluto is hooked by a mail hook. Or does he? 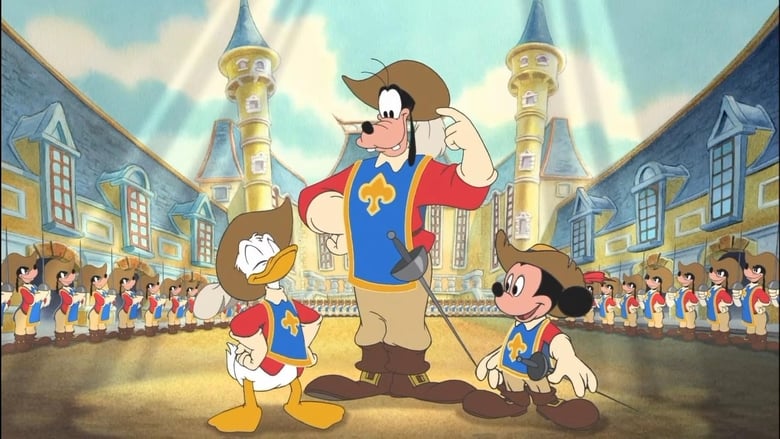