The Last Days of Lehman Brothers 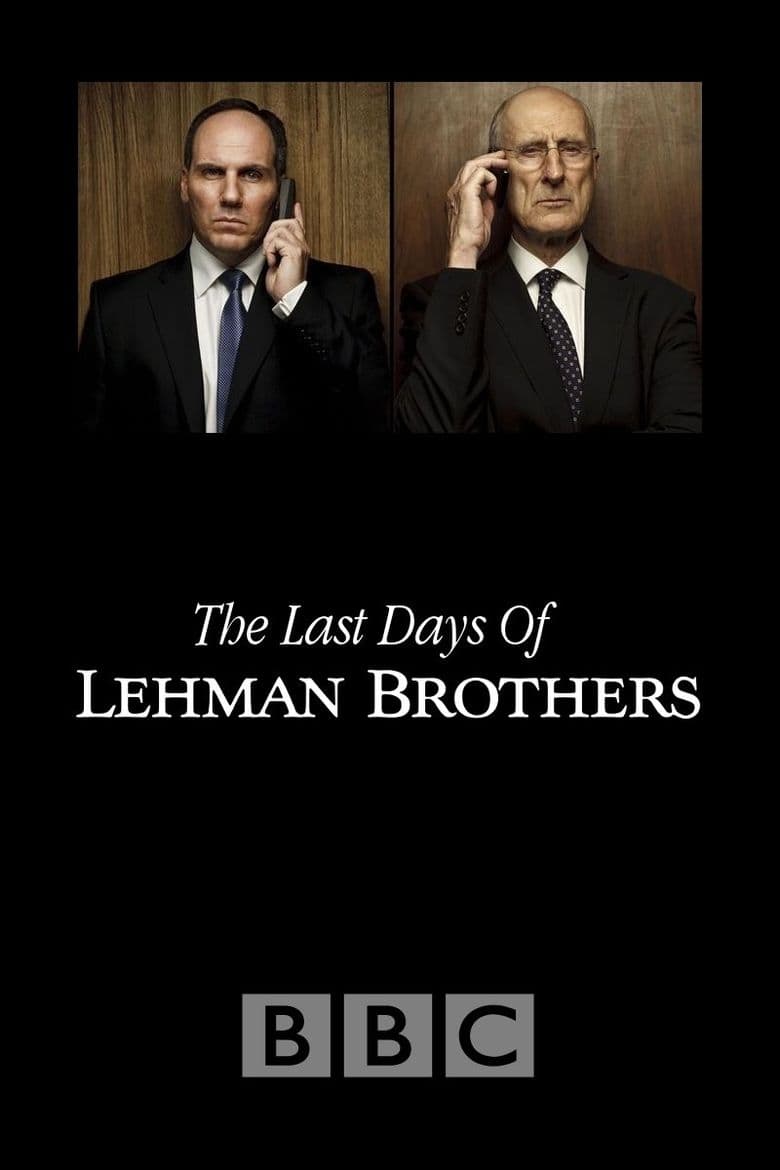 The Last Days of Lehman Brothers

The heads of Wall Street's biggest investment banks were summoned to an evening meeting by the US Treasury Secretary, Hank Paulson, to discuss the plight of another - Lehman Brothers. After six months' turmoil in the world's financial markets, Lehman Brothers was on life support and the government was about to pull the plug. Lehman CEO, Dick Fuld, recently sidelined in a boardroom coup, spends the weekend desperately trying to resuscitate his beloved company through a merger with Bank of America or UK-based Barclays. But without the financial support of Paulson and Lehman's fiercest competitors, Fuld's empire - and with it, the stability of the world economy - teeters on the verge of extinct ...

A film that exposes the shocking truth behind the economic crisis of 2008. The global financial meltdown, at a cost of over $20 trillion, resulted in millions of people losing their homes and jobs. Through extensive research and interviews with major financial insiders, politicians and journalists, Inside Job traces the rise of a rogue industry and unveils the corrosive relationships which have corrupted politics, regulation and academia.

A thriller that revolves around the key people at an investment bank over a 24-hour period during the early stages of the financial crisis.

The men who made millions from a global economic meltdown.

A young agent is tasked with investigating a tangled web of corruption and fraud in New York.

The Wolf of Wall Street

A wealthy New York investment banking executive hides his alternate psychopathic ego from his co-workers and friends as he escalates deeper into his illogical, gratuitous fantasies.

A crew of savvy former strip club employees band together to turn the tables on their Wall Street clients.

Indiana Jones and the Last Crusade

When Dr. Henry Jones Sr. suddenly goes missing while pursuing the Holy Grail, eminent archaeologist Indiana must team up with Marcus Brody, Sallah and Elsa Schneider to follow in his father's footsteps and stop the Nazis from recovering the power of eternal life.

Indiana Jones and the Kingdom of the Crystal Skull

Set during the Cold War, the Soviets – led by sword-wielding Irina Spalko – are in search of a crystal skull which has supernatural powers related to a mystical Lost City of Gold. After being captured and then escaping from them, Indy is coerced to head to Peru at the behest of a young man whose friend – and Indy's colleague – Professor Oxley has been captured for his knowledge of the skull's whereabouts.

Modern treasure hunters, led by archaeologist Ben Gates, search for a chest of riches rumored to have been stashed away by George Washington, Thomas Jefferson and Benjamin Franklin during the Revolutionary War. The chest's whereabouts may lie in secret clues embedded in the Constitution and the Declaration of Independence, and Gates is in a race to find the gold before his enemies do.

Two drunk parents attempt to hide their ever increasing financial difficulties from their daughter and social circle through elaborate neighborhood schemes.

A young and impatient stockbroker is willing to do anything to get to the top, including trading on illegal inside information taken through a ruthless and greedy corporate raider whom takes the youth under his wing.

Enron: The Smartest Guys in the Room

A documentary about the Enron corporation, its faulty and corrupt business practices, and how they led to its fall.

A freak hurricane hits Los Angeles, causing man-eating sharks to be scooped up in tornadoes and flooding the city with shark-infested seawater. Surfer and bar-owner Fin sets out with his friends Baz and Nova to rescue his estranged wife April and teenage daughter Claudia.

Financial TV host Lee Gates and his producer Patty are put in an extreme situation when an irate investor takes over their studio.

Armed men hijack a New York City subway train, holding the passengers hostage in return for a ransom, and turning an ordinary day's work for dispatcher Walter Garber into a face-off with the mastermind behind the crime.

Kenny Wells, a modern-day prospector, hustler, and dreamer, is desperate for a lucky break. Left with few options, Wells teams up with an equally luckless geologist to execute a grandiose, last-ditch effort: to find gold deep in the uncharted jungle of Indonesia.

Man-eating crocodiles return to the lake as two males and one aggressive female crocodile, which is protecting her nest, wreak havoc on the locals.

Unlike their heroic counterparts on the force, desk-bound NYPD detectives Gamble and Hoitz garner no headlines as they work day to day. When a seemingly minor case turns out to be a big deal, the two cops get the opportunity to finally prove to their comrades that they have the right stuff.

After retrieving the Crystal Skull in Utah, Flynn Carsen receives a map in the mail with the secret location of King Solomon's Mines. When the scroll is stolen, Judson explains the power of the Key of Solomon's book and assigns Flynn to retrieve the map. The map is useless without the legend piece to decipher it, which is located in Volubilis near the Roman ruins in Morocco. Flynn heads to Casablanca to the ruins where he is chased by a group of mercenaries leaded by General Samir. They too want to find the location of King Solomon's mines. Flynn teams-up with Professor Emily Davenport working in the dig and they escape from General Samir and his men. While traveling to Gedi, they save the local Jomo from death and the trio faces a dangerous journey through the wild Africa.